The 36th Celebration Ceremony of Police Day, 15th June every year in Taiwan, is held at the auditorium of Hsinchu County Police Bureau on 12th June, which is hosted by Magistrate Chu in appreciation of the police officers’ devotion as well as the support of the volunteer police officers, civil defense members, neighborhood watch members and the volunteers assisting the policing work.

Apart from encouraging the police officers in the talk, awards are given by Magistrate Chiu, Ching-Chun (邱鏡淳) to the Friends of the Police Association’s counselors for their support of the policing over the years. Also, police officer Li, Chih-Hua (李志華) and Wang, Kuo-Chieh (王國傑) are receiving awards as they have won the national prizes of the best police beat. Wu, Chung-Yen (吳忠諺), who won the title of Model Squad Leader, Lei, Meng-Ju (雷孟儒), the Model Forensic Detective Sergeant title-winner, 16 winners of Model Police Officer, and 4 winners of Model Volunteer are also receiving awards in the celebration ceremony. 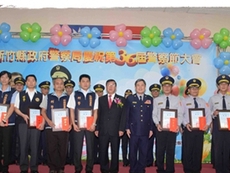