Hsinchu County Police is aware that there is a significant increase in scams of pay-via-text (手機小額付款), text-with-a-fraudulent-link (惡意連結) and fraudulent purchases of online game credits (購買遊戲點數詐騙) recently, which often happens to people who use social network apps to send messages to their friends. The swindlers usually send texts and pretend that they are one of the friends of the person who received the texts. Therefore, when the receivers believe the texts are genuine and reply to the texts or click the links included in the texts they might think they are helping their friends but actually they are moving their money to criminals’ pockets.

In order to raise the awareness of the public about the tactics of the above fraud, especially those who use smart phones, Hsinchu County Police Bureau has produced a promotional video on Youtube and shared it via its Facebook page. Tsai A-Ka (蔡阿嘎), an actor who enjoys a great deal of popularity from his online videos, was invited as the main character in the video not only because of his vivid and humorous performance but also his high publicity among young people which would allow the message of the video to be conveyed to its targeted audience thus accomplishing its goal – increasing the anti-fraud awareness of the public. The video has now been watched more than 310 thousand times since its release and the number is still rapidly increasing. 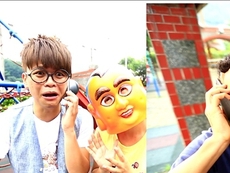