Tribe Policing Carnival 2014 was held at Jianshih Indigenous Museum on 13th September. Hengshan Police Precinct, as the organizer of the event, invited The Unique Atayal College (泰雅學堂), Chinese Taiwan Christian Field Association (中華臺灣基督教曠野協會), Nahui Church Dancers (拿互依教會舞蹈團), and the Harmonica performers from Dadu elementary school (大肚國小) to&nbspjoin&nbspthe carnival as well as giving their marvelous performances. Also, a performance of ’helmet dance’ was given by a&nbspgroup&nbspof elementary school students, which had overwhelmed the crowd in the event due to their extraordinarily adorable charm.

The Fire Bureau, Public Health Bureau, Indigenous People Affairs Administration Department, Social Affairs Department, Education Department of Hsinchu County Government had set a variety of game booths as well as Hsinchu County Service Station of National Immigration Agency and Hsichu Forest District Office were also joining in this joyful event. By the use of lots of game booths and through the interactions between the officers and the local residents, the awareness and prospects of anti-drug, anti-fraud, anti-DUI and the safety of women and children were expected to be conveyed to the public. The Traffic Brigade of Hsinchu Police Bureau, for example, proposed a contest of ’the loudest speaker’ in which the participants were required to shout out loud the slogans regarding traffic safety. The contestants who had the highest scores on the Db machine had won a big prize and the rest of the participants, however not winning the game, also had a piece of promotional item as a gift for joining. Besides, lots of promotional items were given to the local students when the crime prevention related quizzes posted by the officers in each of the game booths were answered correctly, by which the local residents had enjoyed an educational and cheerful holiday together during the carnival.

’I would like to give my appreciation for the Hsinchu Distric Prosecutors Office because the support of deferred prosecution fund, which has greatly contributed to this event and also the improvement of knowledge regarding crime prevention among the local residents in Jianshih Township’, expressed Police Commissioner Huang, Chia-Lu (黃嘉祿). Magistrate Chiu, Ching Chun (邱鏡淳) added that ‘the government has made every effort to raise the quality of the living and improve the welfare of the indigenous people. A considerable amount of annual budget of government as well as the sponsored fund from central governmental bodies has spent on the improvement of transportation infrastructure, especially in Wufeng Township and Jiangshih Township. The Hsinchu County Government will continue its effort on reducing the disparity between city and countryside in the implementation of a healthy city.’ 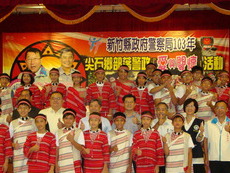