Apart from the officers from HsinChu County Police Bureau providing basic legal knowledge and advice, a medical team from HsinChu MacKay Memorial Hospital was also invited to join the carnival. Medical services and health checks were freely provided to the local residents in Wufeng Township, which included X-rays, Pap Smears and liver cancer and mouth cancer screenings. Also, game booths were set up by HsinChu County Public Health Bureau and Wufeng Township Public Health Center as one of the main features of the carnival, in order to provide information regarding Second Generation National Health Insurance and to promote medication safety and healthy drinking habits.

‘The policing carnival was fully funded by deferred fines of the HsinChu District Prosecutors office’, Police Commissioner Huang said. ‘By using the aforementioned fund the police force was able to promote basic legal knowledge in the indigenous community so that the local residents would have a better understanding of these laws. Anti-fraud measures, the consequences of drinking and driving and promoting the safety of women, children and young people were provided in the game booths. Furthermore, a number of governmental institutions were invited to join the event providing knowledge in each of their specialised areas which added extra value to the event, these included the Indigenous People Affairs Administration Department, the Social Affairs Department, the Agriculture Department of HsinChu County Government as well as the HsinChu Forest District Office and the HsinChu County Service Center of N.I.A..’

‘The administrative team of HsinChu County Government is devoting themselves to improve the welfare of the indigenous community in Wufeng Township and Jianshih Township’, Magistrate Chiu said. ‘We have intensified efforts in seeking funding in order to improve the transport infastructure in these two townships as well as the installation of satellite television with the hope that HsinChu could become a Healthy County where the disparity between city and countryside is reduced and the welfare of every individual is of equal concern.’ 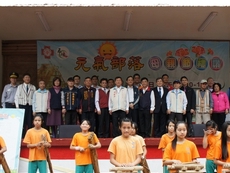